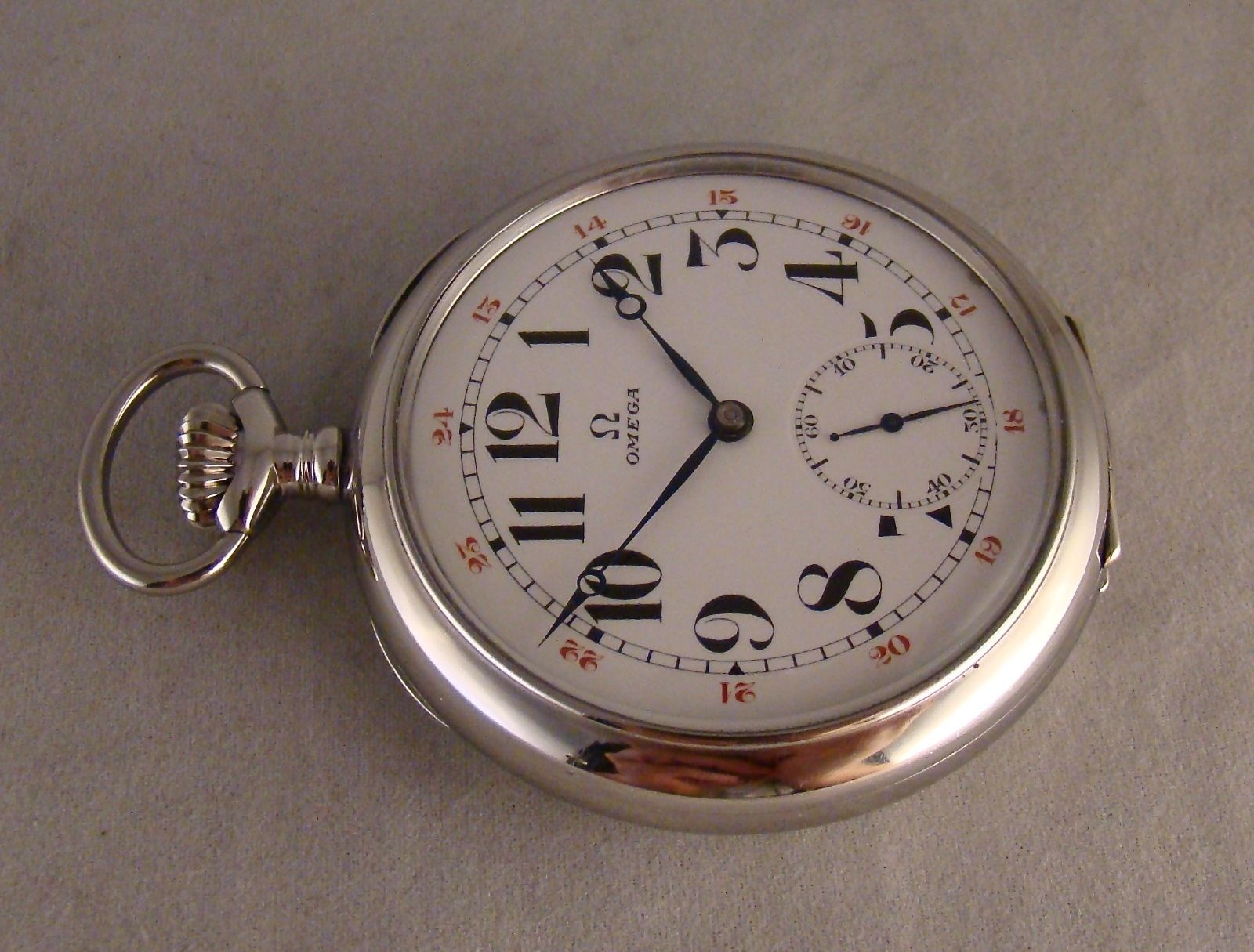 Back in April, a nice oversized Omega “De Bord” Chronometer pocket watch showed up for sale on eBay. It probably lasted only a few minutes before it went off the radar screen, thus, for the most, it remained unnoticed. The description didn’t help much either.
The watch was little covered in the past weekend Market Report article, but since then, my mind remained devoted to this absolutely rare bird. Of course, one of the reasons is, this is a real Omega collector center piece, sold at a price of an above average collection starter piece.
But the legendary 21″‘ NN L Bull or 47.7 NN L Bull worth all attention, no matter where it shows up. 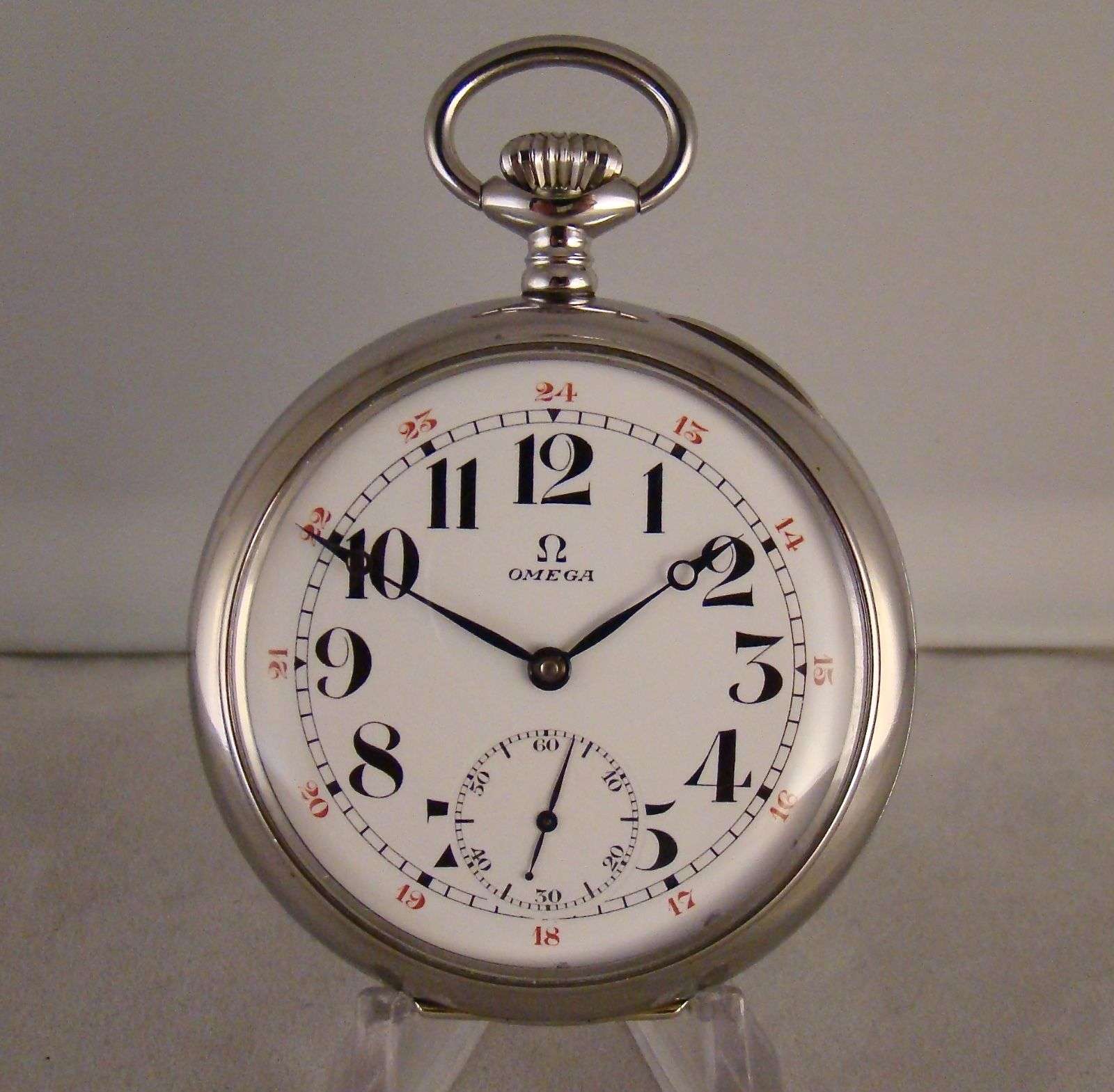 These movements came in production at around 1911, designated as 21″‘ NN L Bull, and were to put Omega in the Chronometer competition records. Their earliest production seem to have span until 1919 when they were renamed 47.7 NN L. The final 30 batch emerged only in 1951. A total of 774 is said to have been produced, including the oversized spring barrel Chronometer cal. 21/24″‘, of which existence remains more of a mystery to this day. 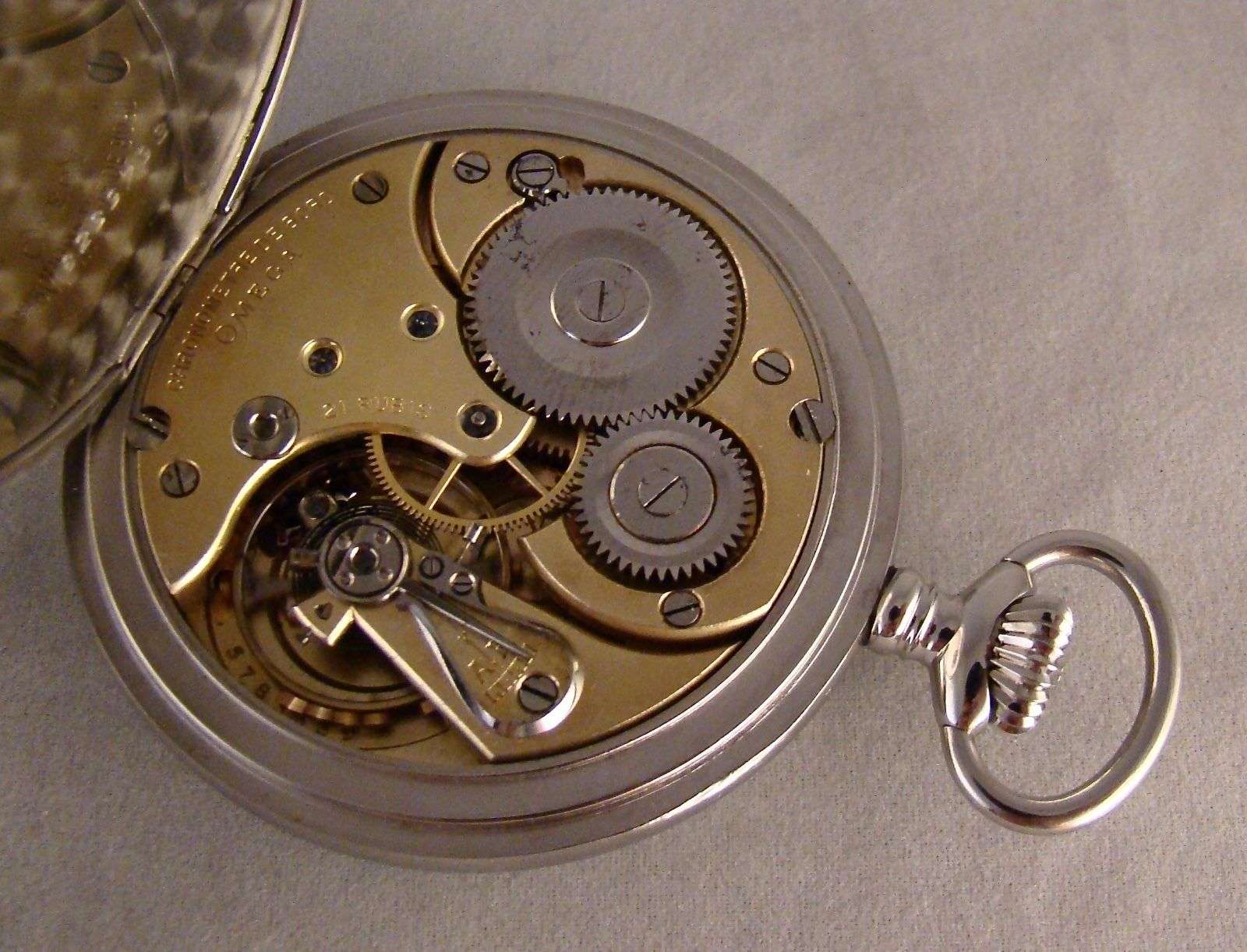 According to the vendor’s description, the serial is 5.783.339 which means is one of the 300 units of the 1919/20 batch. These are recorded as Ship’s Chronometer version, all having Maltese stop work at the barrel, but without the large spring barrel.
We are used to see these as cabinet watches, in brass cases and gimbal suspension in wooden cases. However, the beauty with Omega is there are always exceptions. A very few of these calibers were delivered in either steel, silver or gold pocket watch cases.

The watch in question is the rare stainless steel version, ref. CK 111 YV. But all the “De Bord” pocket watch versions are rare and worth a great deal of respect and attention.
Over the years, maybe less then a dozen “De Bord” pocket watches have made their way to auction or public discussion channels. The one above is completely original, and despite the minor dial issues, is in good condition. I honestly, do not expect to find another dozen in the next decade. 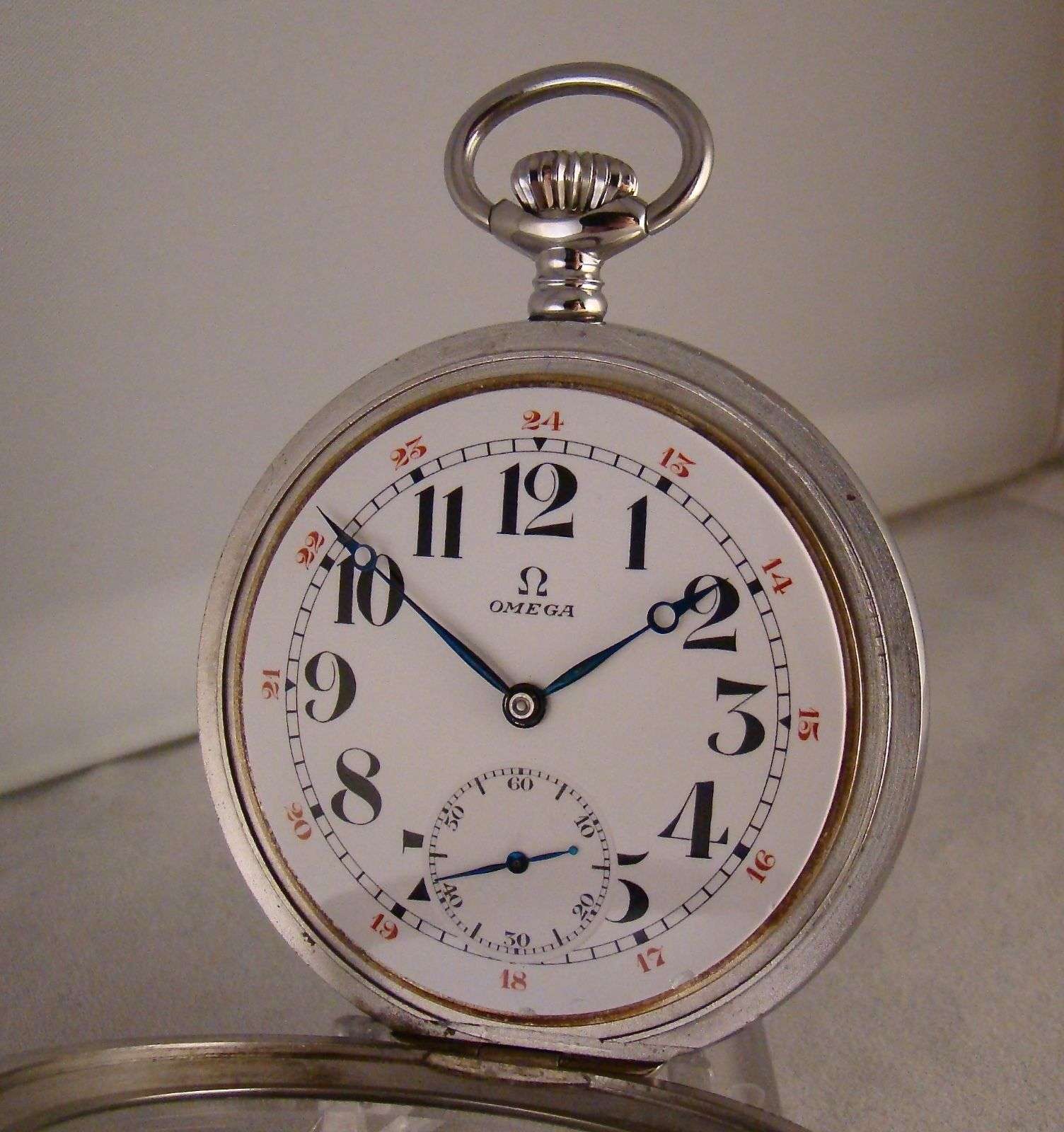 A curious detail that pops out easily, is the serial gap between the case and movement, 8.239.793 vs. 5.783.339. To learn more on the movement and case serial discrepancy, see the How to date your Omega pocket watch article.
Well, if the movement started its life in 1919/20, the case tells us this was delivered almost a decade later, in the form of a pocket watch. The other astonishing thing is, this puppy is only 6 units younger then the 5.783.345 Alfred Jaccard’s Kew-Teddington Observatory Record Chronometer Cal. 47.7. 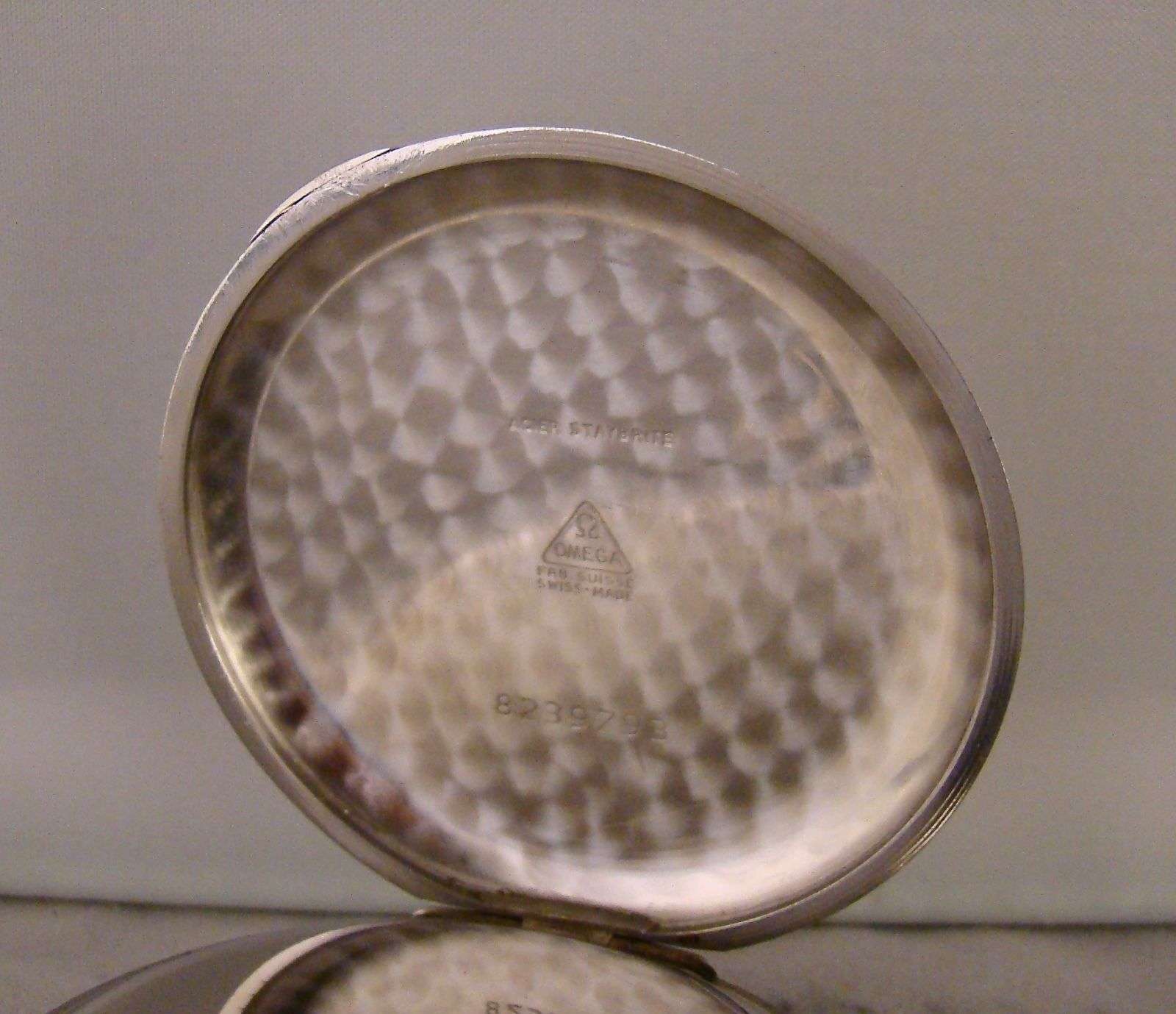 Putting all pieces together, I think, what we have here is a US market Omega Ship’s Chronometer export, although it doesn’t show any import code. If this is confirms, the watch should correspond to 1927-1930, delivery period to US (Navy ?) – either thru Omega USAOWC or J.R. Wood agents, and should fall into the “no import codes between 1928-1930” theory.
To put a real price tag on such an important piece is not an easy task, considering the tight ownership race. So, who isn’t green with envy ? But the indulgent thing is, there are plenty of grails hiding under a rock somewhere, waiting to erect.