Blog
How to date your Omega pocket watch
June 24, 2016 By TimeTwister
0

What makes Omega pocket watches so special, intriguing and hard to determine is the “jungle of calibers” matched up by the beauty of the dials and the variety of the cases they were fitted in.
Either if you chose to hoard them by dial and case variation, or simply by caliber, even only between 1894 and 1922 (La Belle Époque of the Omega pocket watch creation), it could be a theme for a lifetime.

By the end of the Great War, the wristwatch was the latest timing accessory – although not widely available -, that would ultimately influence the watch history, but the pocket watch was not yet at it’s peak. It is true that the pocket watch had to keep up with the permanent miniaturizing process and reinvent in so many ways, but the demand was still high by 1960’s, which tells a lot about it’s place in the society.
In pocket watch terms, the 20th century would in fact be monopolized by 18″ and ultimately by the 17″ line calibers, but the most beautiful things that carried out the Omega symbol, were forged at the beginning of the century. Their quality was so impressing – compared to the technological advance of the early 20th century – that it is simply impossible to find a correspondent in modern times.

Between 1894 and early 1910’s, Omega has delivered most of it’s pocket watch movements with serial numbers engraved on the dial side, which makes it, for the uninitiated hands, hard to access and therefore, hard to date. Since 1912, with little exception, most of the manufacture had serial numbers both on dial side plate and on the bridge side. 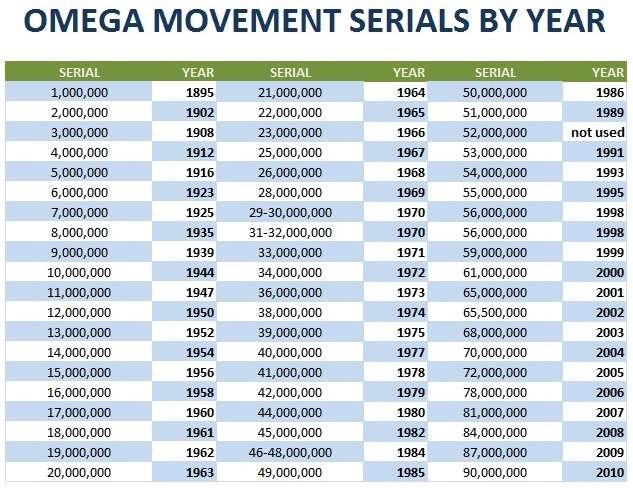 Although Omega AJTT says that the case # “reflects production and not the actual commercialization”, the case # would actually give a greater perspective related to commercialization or at least to assembly date.
I have sometimes encountered serial gaps of about 3 Million units between the case and movement #’s, which – if you followed up by now, and if the franken thought has faded away -, automatically makes one believe that either the movement has been manufactured way before the case and sold at a much later date, or ebauches with early serial numbers, have been finished at a later date, close to the case manufacturing period.
It is not unusual to see stock leftovers sold much later then the production date (like cal. 19″ and it’s derivatives, mostly B quality, one of the Omega best sellers). However, most of the top quality manufacture like chronometers, took years to finish, although they were assigned early serials numbers (say in the 2.500.000 serial range), and therefore deliveries were slower then many lower quality counterparts (already in the 3-5.000.000 serial range).

Only the movement numbers came in batches, in a sort of chronology per caliber production, while two movements with consecutive serials could have different finishing (ie: one gilt, one nickeled) and different delivery period. While case numbers can be seen randomly paired with movements, with absolutely no chronology. Which means that if the Omega movement # 5.237.564 has been paired with the case # 6.076.500, the Omega  movement # 5.237.565 could have been paired with the case # 6.058.***. Absolutely no logic. 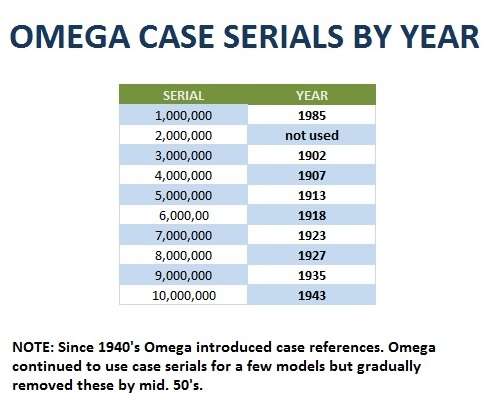 I would add that it is impossible to find an Omega case serial in the 2 Mill. range. It may well have to do with the fact that Omega’s supreme quality manufacture was in the 2 Mill. range and these movements were massively exported to the American continent without any casing, but there are many other European deliveries, including goliath or lower quality movements, observed with 2 Mill. range movement serials, paired with 3 or 5 Mill. case serials.

The above charts, may not be the ultimate, but are based on a long observation period, compiling elements from various sources. They will not always correspond with the AJTT or other available charts. One does not have to always agree with, and i will gladly accept any amendment or solid contribution.
I am working hard on improving and breaking the movement serial chart into smaller sequences, compiling as much variables as possible.
Unless your Omega comes with the original Certificate, don’t expect to find your birth year watch using the above serial compilation!!!
The chart will never be as accurate as an Extract from the Omega Archive, but it can give an idea of about how old is your watch.

However, dating Omega pocket watches is not the only complicated thing. Counting jewels or grading your watch may prove harder then dating, at least when it comes to the early specimens. Read more on how to grade your Omega pocket watch here.