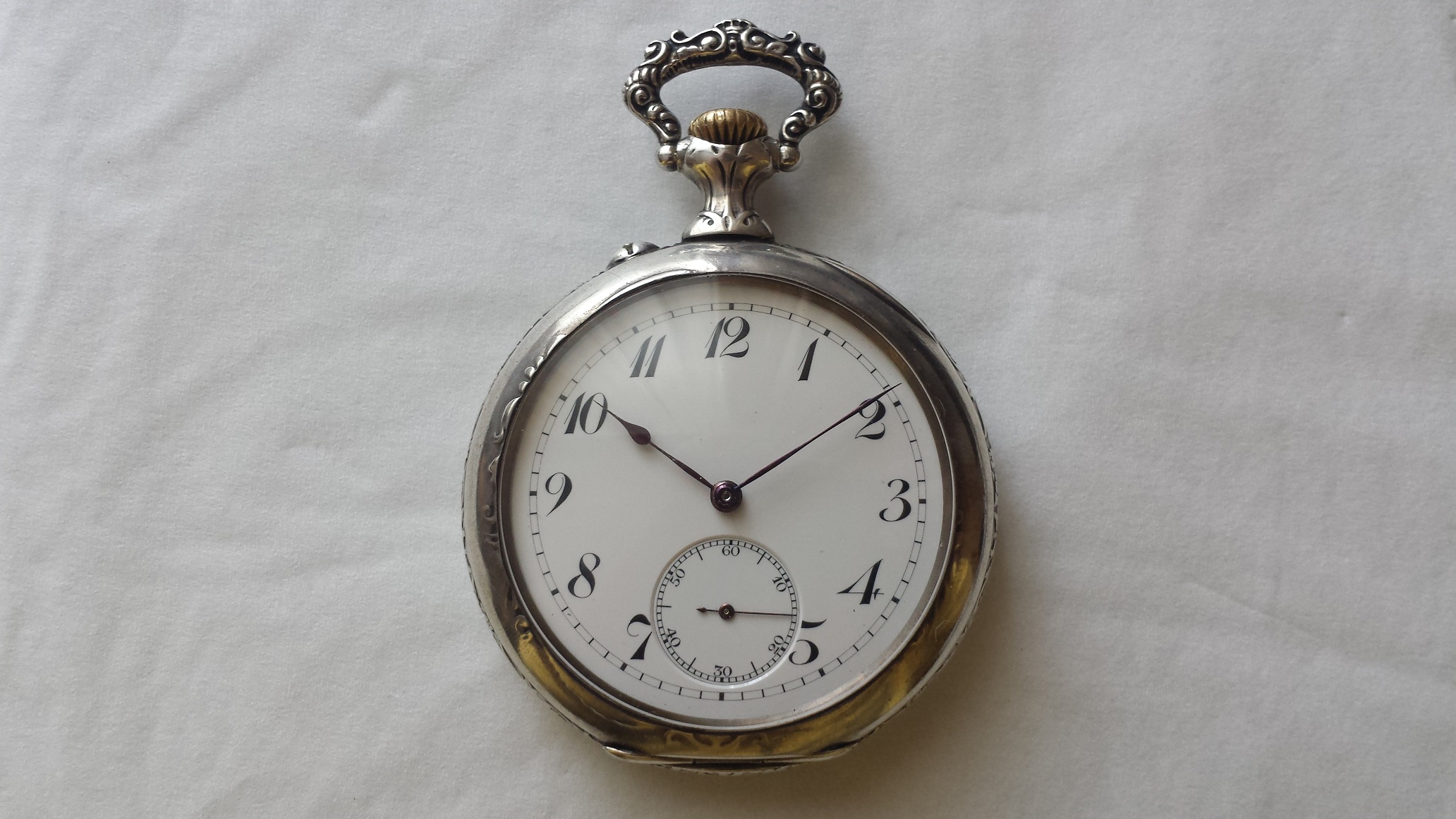 Blog
How to determine age and who to attribute this pocket watch to ?
April 30, 2016 By TimeTwister
0

A brief introduction: Besides value, asking how old is my watch is certainly the most frequent question on any watch forum.
If you intend to stay longer in the hobby, to better understand the importance of your watch, – besides the usual set of skills – it takes perseverance; because each time you feel confident, small uncertain facts or missing puzzle pieces, will mess up your balance, making you consider how little you know, and start all over again documenting. Don’t give up!

Well, to determine age, I would find important to know at least as much about the watch:
– as in most of the cases, in lack of any paperwork, I would care for any data on manufacturer (e.g.: period in the trade, caliber, et cetera)
– movement serial number database (and sometimes casing serial or reference)
– service ledgers of movements with appropriate serial numbers
– era catalogues
– case, dial style and even movement color is relevant in establishing age with certain manufacturers

But what to do when you don’t have much of the above ?

I came across this pocket watch a while back, and was quite impressed with it’s large engraved case. The previous owner did not know much on it either, but it was part of a small lot, and it really wasn’t for this one that caught my attention at the time. I remember that the works gave me a vague idea of a maker’s resemblance, but never really bothered to check further, until now.

So you start by studying what you have and eventually dismantle it into pieces, trying to find more clues on the maker and period.

A nicely engraved case, showing a family theme. I do not know if this was inspired by a more famous work as it usually happens with engraved or repousse casings, but it definitely is a nice expression.

Nothing on the cuvette but, fortunately, a logo on the inside back case, the silver fineness (0,875) and the rampant bear Swiss silver cartouche. The only serial I can refer to is # 9, and another # 8 just under the 9 on the inside dust cover. 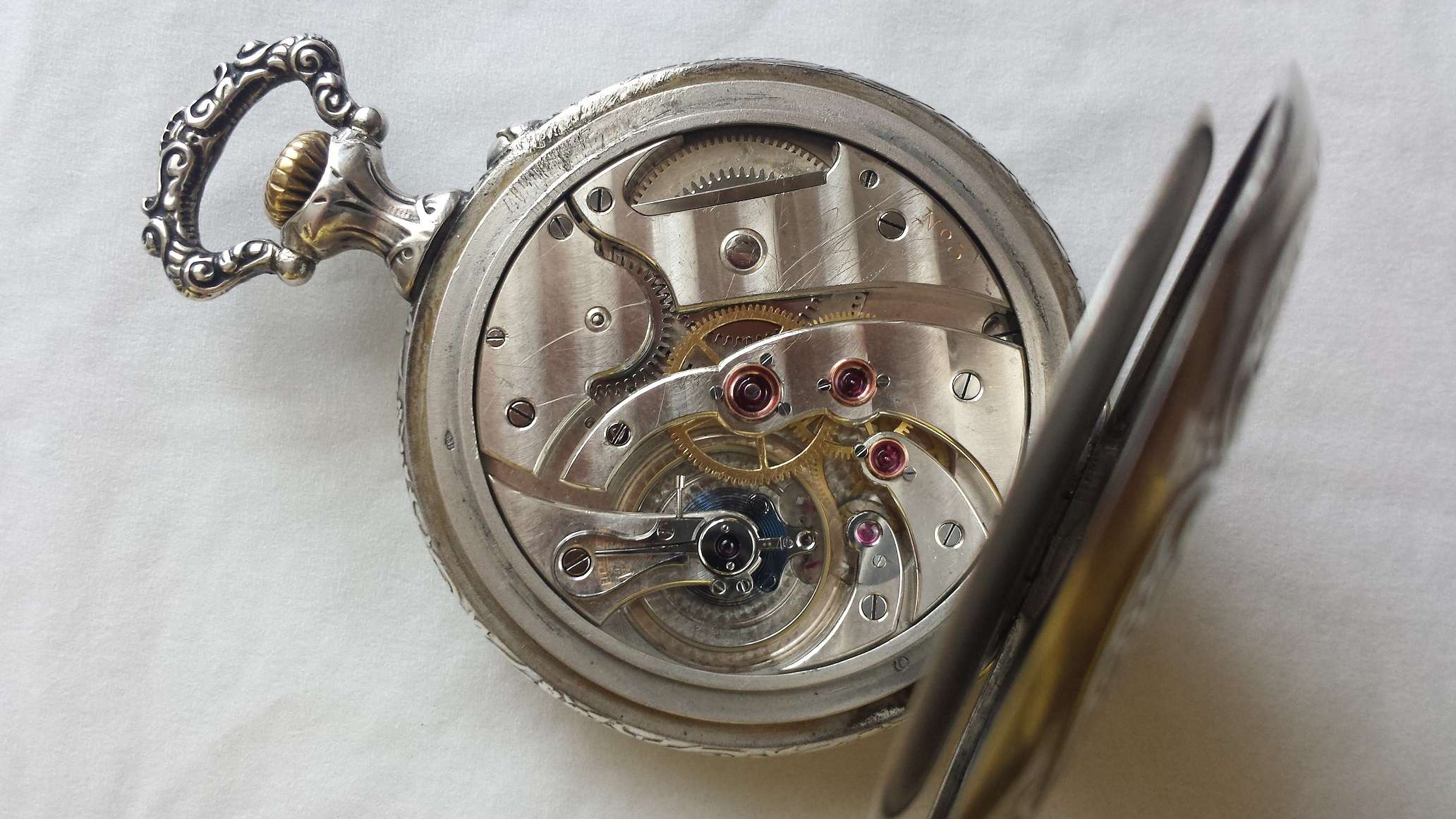 Movement shows another short serial # 3 on the barrel bridge. For the record, it’s a 19 lig., 21 jewels nickel finish movement.
A bit puzzled for the unpaired case and movement serials. Not that I haven’t seen many manufacturers using the unpaired serial system, but on a single digit serial, I really can’t explain the reason.

So far more questions then answers. So towards lifting the dial to see the dial side plate.

A view not many get to see on their watches, which is pity. Nicely decorated plate, a pretty interesting setting wheels bridge and setting lever mechanism manually polished, cap jewels and cap jewel settings, going hand in hand with the top plate view, sign of good quality, possibly a LeCoultre ebauche. The serial #3 observed again on the bottom plate, as well under each bridge. But I’m basically at a loss here.

Returning to the case logo, I quickly notice it has been manufactured by Holy Freres:

Therefore, an artistic engraving company established in 1893 at St. Imier in Switzerland, specialized in manufacturing watch casings and medals. Here is where watch and medal collecting meet interests.
Pritchard did not list Holy Freres; naturally, they were not watchmakers. Better luck with JSH. I also find the logo applied on the inside case back dating to early 1910’s. Therefore, an art nouveau engraved case and pin set movement; that should make sense.

When I first looked at the movement, the first manufacture that crossed my mind was Agassiz. That was even before I removed the dial. But looking closer at the movement, although it may resemble to Agassiz, I am yet to find an identical specimen to make an example.

A spark of hope reignited the original Agassiz thought the moment I looked under the dial:

The dial mark, ZJ, stands for Zélime Jacot dial factory, at the time owned by Flueckiger & Cie., company established in St. Imier, just like the case maker. An interesting coincidence.
My thoughts are, there is great chance the watch was also assembled in St. Imier.

It is known that Zélime Jacot has been in the trade since the 1860’s and has worked close, as a dial supplier for Longines. During 1860’s, in the early days of the Longines, the company was still under the control of Auguste Agassiz. It was then, when Geo Agassiz, son of Auguste, joined E. Francillon in his venture. Before separation, the younger Agassiz must have been familiar with the trade and the market suppliers. I also speculate on the fact that the early Agassiz “fish” trademark is a tribute to his famous naturalist uncle, Louis Agassiz, brother and partner of Auguste Agassiz.
It is also known that, with the help of the family, Longines and especially Agassiz, left a significant mark on the US soil. However, there is no specific export marks to the watch, so I can’t comment much on the delivery whereabouts. It could be very well possible that the watch never left Switzerland.

St. Imier’s most prominent watch companies in the early 1910’s were Longines and Agassiz. Of the two, Agassiz had the benefit of a better quality but not as a complete manufacturer, and rather as an Établisseur. However, I have never seen an Agassiz catalogue of 1910’s. I assume that by this time, Agassiz was offering a wide range of movements, but my guess is very little of their own production, if any. I imagine finishing high quality ebauches would have been more lucrative and profitable. It is known that two of the favorite Agassiz ebauches were Touchon’s and Lecoultre’s, first for the ultra slim calibers. Although Touchon was in Trade, separately, only between 1907 and 1921, it would fit the period. But with Touchon being a very exclusive watchmaking company, their works have been delivered only in most noble casing materials, so this does not fall into the regular Touchon characteristics.
Even if it’s hazardous to assume who the finisher was, and even on the ebauche provenance, i suspect, a LeCoultre cal. 8 – 19 lig. would be the most appropriate. One could also differentiate Agassiz for preferring straight toothing for their crown and ratchet wheels in their LeCoultre works. But until new evidence, I will assert that the attribution mystery remains unsolved, while for the unpaired single digit serials – to put watchmaking and ice skating comedy in the same sentence -, “Nobody knows what it means, but it’s provocative” !