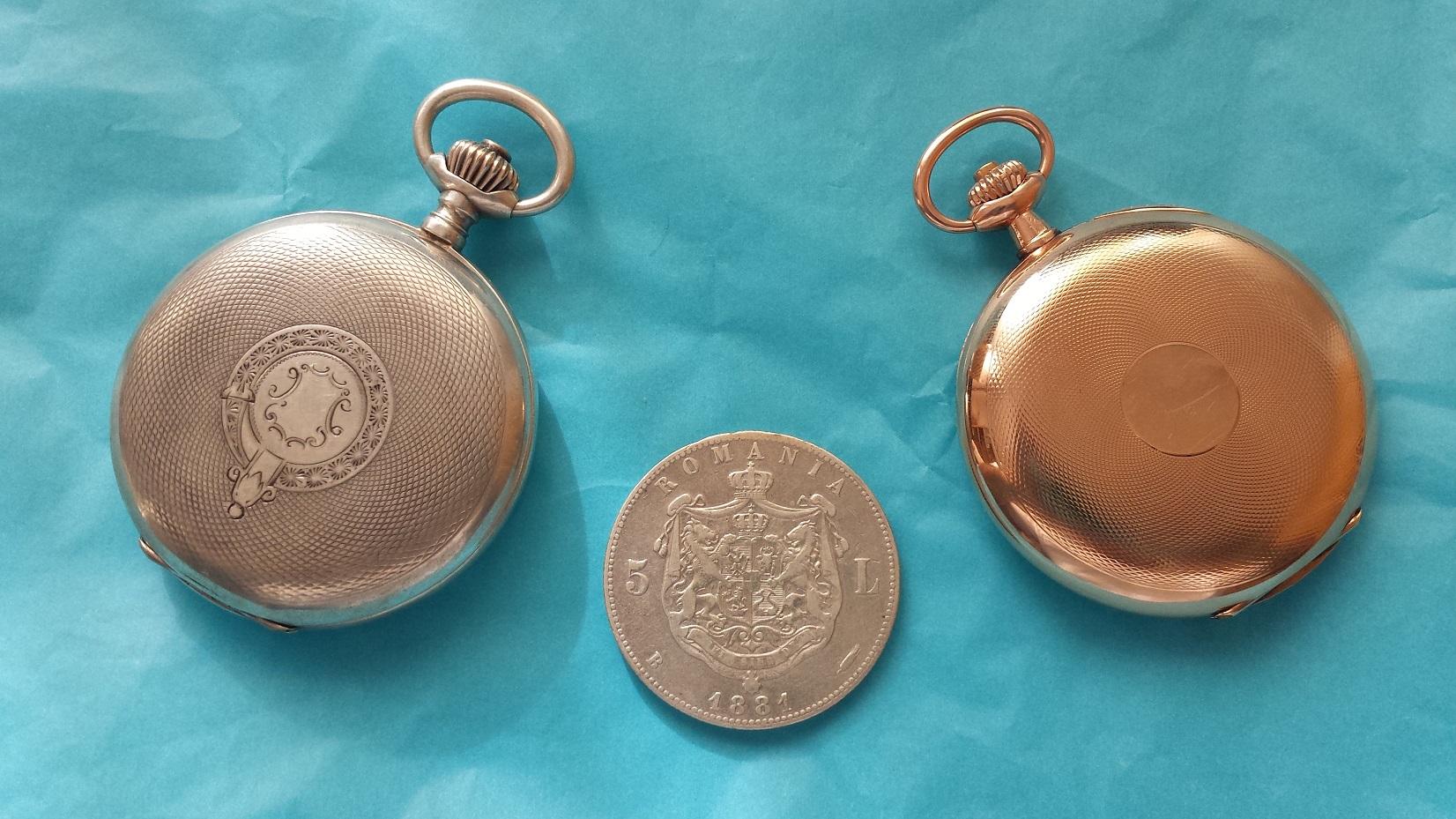 …or what happens when you put together a rare coin and a pocket watch ?

Not long ago, an intriguing pocket watch bearing a large gold coin has been sold through the Catawiki online auction house.

The lot was sold early this year (Feb. 2016), so this article may seem late. Well, maybe it is, but it’s meant to shed some light over what might have seemed a less important sale.

As one can see, the sale was for a Full Hunter pocket watch in a 14kt gold case with a white enamel dial, and a high quality gilt movement, manufactured by Ulysse Nardin, a renowned Swiss watchmaking company . Nothing unusual… if it wasn’t for the fact that the watch case is adorned with one of the rare and important gold Romanian Kingdom coins put in circulation around 1906. This coin is actually a Jubilee – medal coin with a nominal value of 100 Lei (ca. 100 Swiss Francs of the same period, with a mass weight of ca. 32.26 grams and a diameter of 35 mm).

At first sight, the meaning of a coin on a pocket watch, is a bit unusual (although not unseen), so in the Romanian’s major watch fora, the fake or say a later addition thesis was much preferred over originality. And the reasons are multiple:

– Many of the imports in the Kingdom of Romania, up to the end of WW2, and later in the Popular Republic, either through official channels (Public Procurements) and through private contractors, have been documented, to a great extent and with great efforts, with the help of the Romanian watch collectors community and with the utmost and important contribution of C. Buzdugan, through his encyclopedic website.

– Due to the economic situation, Ulysse Nardin has never been as popular as, say, Longines within the Kingdom, so such orders are seldom seen.

– Coin or medal decorated watches have never been observed as a local culture.

But even in the presence of the above arguments, my thoughts were different. A set of circumstantial elements made me consider the watch is nothing but authentic. Both from a watch and coin collector’s perspective.
To surmount the above thesis, it is imperative to analyze the watch from various viewpoints, as each facet will act like a rivet in the authentic profile.

1. From the case making perspective:

The watch cases are realized using dies or moulds and each subassembly is treated separately, by being first shaped and later finished. For the case covers, there have been observed two more common executions:
– lids executed from one sheet
– lids executed from two or more sheets, with a flat or dome surface, cut and integrated into a conical framework

Here a one sheet outer case executed by Martin Matthews for an 18th-century pocket watch:

Lids executed from a single sheet, are not casted but actually deformed and adjusted until fit into size. Pocket watch cases processed this fashion, in Switzerland, in the most common forms, usually have dome lids versus flat surface lids.
A small experiment: If one tries to attach over a dome case a 5 Lei silver coin with any mintage year between 1881 and 1901 with a 37 mm diameter, and 25 gr., will soon observe that the coin will not rest evenly on the surface of the case. Therefore, the Ulysse Nardin pocket watch had specially made large flat surface lids to integrate the coin at it’s size (or carefully chosen by the allegedly counterfeiter).

I chose the 5 Lei silver coin as an example because of its common style in the European numismatic culture. The 37 diameter vs. 25 grams, for a nominal value of 5 Lei, Leva, Korona, Francs, Pesetas, Lire, etc. was quite the standard and of frequent circulation in either newly founded or most powerful European Kingdoms, Empires or Republics at the end of the 19th Century.

Here how a 37 mm coin would rest on a dome vs. flat case:

2. For a coin to be attached on a watch casing, or for a movement to be hidden inside a coin, it must undergo several processing stages. Of the ones I’ve observed so far, here are a few:
– decoupage
– sectioning or side cutting
– reaming inside the sectioned coin
– heat soldering
– riveting

In this case, the first stage was sectioning the coin, and then soldering up to the case.

– If the watch would have had a dome casing, the coin should have been bent, which would have left marks on both sides of the coin or on the edge. The edge of the coin is grained, so any improper grips or touch could have been later observed. The overall preservation grade for the coin is good, without any artificial wear and tear. There are no handling marks, besides a small scuff on the pearled circle, at 6:00 position on both the obverse and reverse, most likely from holding while the coin was sectioned.

– If the coin would have been attached at a later date then the watch delivery date, most likely, the coin would have had a greater wear grade, if put in circulation (although XF+ to BUNC grades for this coin can still be observed in private collections).

– If the coin would have been attached at a later date then the watch delivery date, possibly somewhere in the Eastern bloc, we would have observed rivets or decoupage marks on the inside of both covers. One can find plenty “unique” and “antique” fantasy watches auctioned regularly on eBay, having this kind of marks.

– The nicely decorated case with floral motifs around the coin edge and the pearled circle just under the coin in conjunction with the coin pearled circle show a moderate amount of wear and patina that has obviously added during time.

– The overall condition of the casing, enamel dial and the movement are consistent with the coin condition and they show a moderate degree of wear and tear.

– Finally, who would have had the motivation to alter the coin and attach it on a watch in such modern times when the market value for the coin alone, in the actual preservation grade, would fetch anywhere between 2500-3000 Euros, in a private sale. I would also have to add that the rate for this coin has not varied much since 2008-9.
A similar coin, capsuled and with a better preservation grade, would easily breach the 3000 Euro landmark.

Here, such a coin, with a MS61 PGCS grade, although, as a personal preference, I would guide myself better with the NGC standard in mind.

The coin has been offered for sale five years ago. The asking price was 4200 euros. Mind you the PGCS grade, and the coin showing glossy mint luster, intact sideburns, ears, hairs, cheekbones, beard and everything a collector wants.

Courtesy of Ulysse Nardin, I have received the following confirmation from the archive:

This tells at least the movement has been produced in 1907. Unfortunately, records about casing couldn’t be saved. The titanic work in restoring the archive, as I have quickly learned, couldn’t have been possible without the important role and direct contribution of Mr. Rolf Schnyder, the former owner and CEO, and the key figure in the relaunching of the Ulysse Nardin company.

To sum up the above, even in the absence of casing archive record, I would have no doubt that the watch has been manufactured and delivered by Ulysse Nardin, exactly as it appears today. The beauty of it is that it was most likely, delivered during the King Karl’s life and it may have been close related to the movement production year. Considering the coin was minted in 1906, and movement produced in 1907, this cannot be just a meaningful coincidence. And the order may have well been related to the Jubilee moment. Obviously, I stand to be corrected at any time, but my feeling tells me there is no other reason for such an important Romanian gold coin, to rest on a timepiece.
You cannot ask yourself, why would someone latter add, a coin so valuable today, on a Ulysse Nardin watch that would bring a hefty premium alone, just for the brand that represents a high standard quality among the pocket watch collectors worldwide, and then to be sold for the ridiculous price of 2900 Euro. This is what I would call an out of the ordinary NONSENSE.

The only unknown mystery would be who was the contractor and the beneficiary of the watch, and only speculate on the reasons for this order. But that’s another story.